Are you leading or facilitating a Business Improvement Initiative or a Transformation Change Programme? Has it started well but you feel it has lost its way? 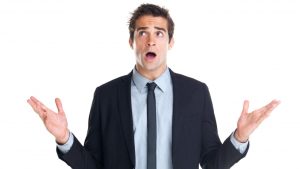 So many well intentioned and appropriately resourced initiatives start well but over a period they start to deteriorate and lose their momentum and direction.

There are several reasons for this and the one that I would like to highlight today is, “not understanding the Hierarchy of Systems”. 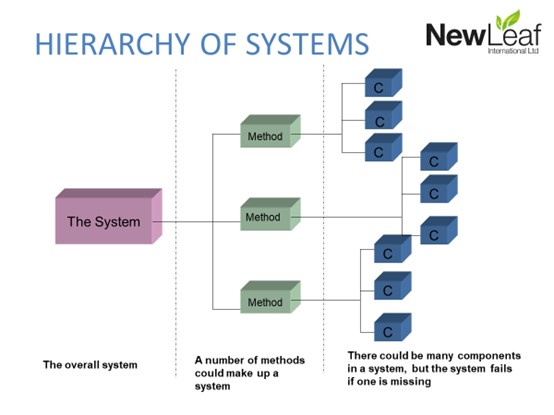 What goes wrong when not thinking about the “Hierarchy of Systems” ……

First, let’s dive into the basics of what is meant by the Hierarchy of Systems.

The hierarchy of systems is a term used in Systems Thinking and is intended to help understand that processes (systems) within the organisation are made of different “levels” or “layers” of systems. Where the definition of a system, in an organisation falls across a scale of ‘hard’ systems and ‘soft’ systems. Hard systems are generally able to be documented and in a practical sense can be “put into your hand”. Soft systems are more intangible and illustrate our work habits and cultural behaviours.

In practise this means there are masses of systems and subsystems within an organisation and as I say, some of them are recognisable and others are not visibly seen, except in people’s behaviours.

The nature and behaviour of organisations unfortunately does not reflect the logical, binary way that we often draw them in Organisation Charts!

So, what does this mean in practise?

The focus must be maintained across and up and down all the levels of systems within an organisation.

All too often the implementers of change work at the lower or tactical level of systems. This is called “reductionism” where the thinking is reduced from the interconnected nature of systems to a single point of improvement.

This is dangerous, as really good work could be done at a lower level system but has little effect on the organisation in total.

The diagram below tries to illustrate an initiative as a hierarchy of systems. 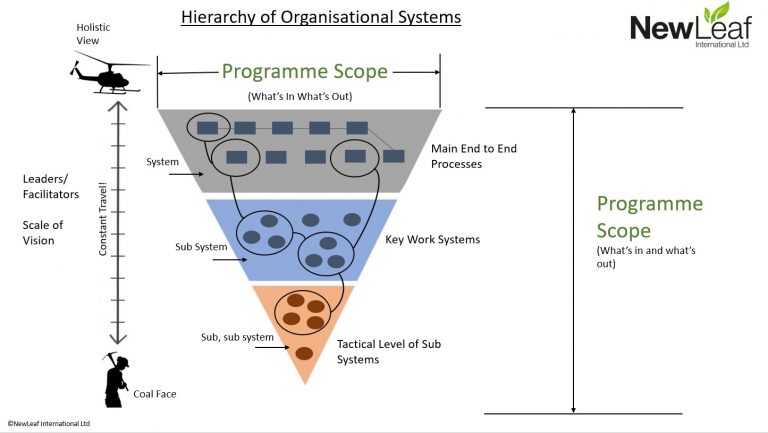 The skill of the facilitator and leader of an initiative is to:

Sometimes taking the helicopter view and then at the coal face and everywhere in between! Too often we stay in the one dimension.

This demonstrates itself in practice, when review processes don’t continually go back to the original purpose (the scope) and review the improvement work done at a lower level system to ensure it has a positive effect on the higher level system or systems in the business. The NewLeaf OGSM System solves this, but that’s for another day.

We are often asked to visit organisations and assess the reason why some initiatives lose their momentum, when still there is considerable activity within the programme of improvement, this is one of the key reasons. People are working hard at a lower level and seniors and others involved don’t stand back and see the interconnective nature of the areas of the business that people are making improvements and if that is making a positive effect higher in the business. That results in effort put into siloed projects of improvement. Where the sum of the parts is not greater than the whole!

Don’t forget to get in touch with us for more details or a friendly chat about what we do and how we do it. 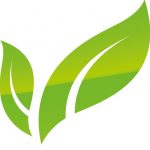